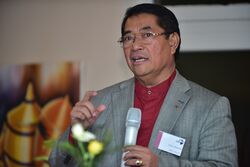 Dear brothers and sisters under the warm roof of our beloved communion United Evangelical Mission,

I am touched to be able to share the good news in our online devotion today. 25 years ago exactly in this time, I was arriving and attending the historical milestone of UEM in Bielefeld in 1996. I was one of the eye witnesses of the transformation of UEM into the communion of churches in three continents. It was a faithful metamorphose from a German mission agency into the communion of churches internationally in three continents. It was a revolutionary decision!

One slogan, which was so intensive discussed, studied and debated from the UEM General Assembly 1993 in Ramatea and 1996 in Bielefeld was “Growing and Witnessing together in Praise, Prayer and Action”. As a young pastor coming to this GA 1996, who came from a third world country, a colonized country, a country with low income rates and a country with the largest Muslim population, I was skeptical with this slogan: Growing together. How come would it be? How can we grow together with the German churches, which had a “golden period” financially at the time, great theologians, and long Christian history? However, I was so blessed after attending the General Assembly in 1996 and returned home with a real new Christian perspective, that in UEM we are able to grow together and equally.

Ephesians 2 verse 21says: “In him the whole building, being joined together, grows into a holy temple in the Lord.” Biblically we are called to grow together, not individually, ethnically, and communally, but globally. This is what we understand as a fellowship or Koinonia. The deepest root of fellowship is the longing of God to bring all people into communion with Him and with one another, as God himself, the Holy Trinity, is one in the communion of Father, Son and Holy Spirit. How can we translate it in our UEM? The term Koinonia-fellowship offers a new vision for coming together, for confessing, praying, witnessing and acting together despite the differences that divide us.

Many stakeholders in UEM knows, that one of the biggest obstacles of our fellowship in the UEM is our mindset. We are still trapped into the mentalities of givers and receivers; saviors and victims; rich and poor churches, etc. The mentalities of supremacy stay consciously or unconsciously if we are able to share a small number of our incomes to those who are in need. Reversely, the attitude of being victims grows if we depict ourselves always to be poor and incapable churches. Since 1996 we commit to change totally these destructive mentalities into a mentality of growing together, if we define ourselves as the members of the body of Christ through UEM. How can we reach a dignified solidarity in the pandemic times? We must be aware, that all of us including in Germany are the victims of this virus but also all of us including in Asia and Africa are also the helpers for one another. The eye-level could only be shaped if those who have many are willing to lower themselves, and those who have little are willing to stand higher, so that our eyes could see each other on a similar level. Yes, we have done it and will still do it at the UEM.

As the UEM Moderator I want to use this opportunity of 25 years of UEM today to say thank you to all of you, the General Secretary and the MT members; all coworkers in Asia, Africa and Germany and all committed people who have supported our communion with warm hearth. Thank you very much! Without you this communion would be nothing. Let us serve UEM with more energetic stamina we have. Let us more attentive to our member churches who are now really struggling with their daily life. Let us walk hand in hand together with the Triune God for the brighter future of UEM. Long age UEM, God is on our side! Amen!