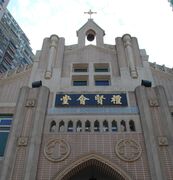 The Hong Kong Synod of the Chinese Rhenish Church donates 10,000 euros for the victims of the recent storm disaster in Germany. Thus, the member churches from Africa and Asia of the United Evangelical Mission (UEM) now support the diaconal emergency aid of the Evangelical Church in the Rhineland (EKiR) and Evangelical Church of Westphalia (EKvW) with a total of more than 40,000.- Euro.

"We are overwhelmed by the sympathy of our sisters and brothers in Hong Kong and are very pleased that they are supporting the people here in Germany, who are currently experiencing so much suffering as a result of the floods, with their prayers and donations," explains Rev. Dr. Dyah Krismawati, head of the UEM's Asia Department.

In addition, the UEM published messages of solidarity from Africa and Asia to the victims of the recent storm disaster in Germany.