United in Mission: Trust and Act Together 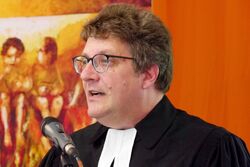 When the Rhenish Mission Society was founded in 1828, it was in a classic understanding that, like Paul once did, they wanted to take the Gospel to the Gentiles. "And Paul saw an apparition by night: a man of Macedonia stood and besought him, saying, Come over into Macedonia, and help us. And when he had seen the vision, we sought immediately to go into Macedonia, knowing that God had called us there to preach the gospel to them" (Acts 16:9-10).

This was visionary thinking for the time, since people did not want to keep to themselves what had become the foundation of their lives. Probably no one at the time could have imagined what 150 years later, through a process lasting several years called United in Mission, would lead to a significant change in the familiar paradigm: the founding of the United Evangelical Mission. Communion of Churches in Three Continents (UEM).
From the very beginning, this fellowship of churches also included the von Bodelschwingh Foundations Bethel. Thus, in 1996, a communion was founded that shares responsibility for its mission to God in all areas.

Giving and receiving in different ways

For centuries, the focus was on an understanding according to which rich, Christian communities gave something to poor sisters and brothers. This basic idea is also found in early Christianity, as reported in the Acts of the Apostles. "But among the disciples, each one decided to send a gift according to his ability to the brothers who lived in Judea. This they also did, sending them to the elders through Barnabas and Saul" (Acts 11:29-30).

Classical thinking was complemented by a classical practice of giving and receiving. Even though, according to Acts, the church of the Christian beginning in Jerusalem was in need of help, and it received it from the young churches outside Judea. However, this gathering had the important aspect of solidarity with one another - even then, internationally. The UEM has developed this principle in such a way that today the 39 members of the UEM all contribute to the communion according to their capacity. Even though up to now the majority of the monetary resources have come from the German region, decisions are made jointly on how the budget is to be divided up, what priorities are to be set for the coming years, and what special challenges and needs need to be taken into account. Thus, in recent years, under the biblical image of the "salt of the earth," there has been joint discussion and action to oppose all forms of violence and extremism and to work for peace, justice and reconciliation. In the future, this will continue as work continues to overcome racism and discrimination.

What the UEM has learned in recent years is that the common budget is not only fed by monetary contributions that the 39 members pay in as dues, but also by a hosting attitude in which the respective members of the UEM take full responsibility for hosting seminars, meetings and assemblies. This enables the churches in Asia and Africa to take very large and committed responsibility for the communion. To understand this and to value it as a completely equal way of giving is not easy, since in our context we are used to accounting by pure numbers. But we hear here the native language of financial responsibility of other cultures, a special Pentecostal experience as in Acts 2: "But they were astonished, and wondered, saying, Behold, are not all these which speak Galilaeans? How then do we hear them each in his native tongue?" (Acts 2:7,8).

The UEM is well on the way to implementing the ideals of the early church. In addition to the internationalization of the staff positions in the board of directors, we have also begun to internationalize other positions in the offices in Dar es Salaam, Pematangsiantar and Wuppertal. Likewise, in the meantime, not only individual conferences are planned jointly, but an attempt is made to ensure the participation of the three regions in all programs of the UEM from the beginning of the planning to the final implementation and evaluation. The digital world has opened up many new possibilities for this, so that we can learn together. "Global learning in an ecumenical perspective" is the name of this concept of the UEM. Actually, this too, the indiscriminate participation of all, had already been agreed upon by the early church at the so-called "Council of the Apostles": "And God, who knows the hearts, bore witness, and gave them the Holy Spirit as well as us, and made no distinction between us and them, and purified their hearts through faith." (Acts 15:8-9). But then, unfortunately, in the history of Christianity, there has often been an attitude of superiority over others.

In a jubilee year, it is permissible to state with the Acts of the Apostles: Yes, the UEM is on a good path. It has learned to learn together, to celebrate and pray together, to be on the way together for God's mission.

"But they continued steadfastly in the apostles' teaching, and in fellowship, and in breaking of bread, and in prayer. But fear came upon all, and many wonders and signs were done by the apostles. Now all who had believed were together, having all things in common." (Acts 2:42-44).

Volker Martin Dally, Member of the Board of the UEM and General Secretary