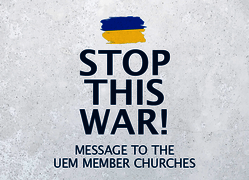 With shock and great concern we witness the Russian invasion into the territory of the Ukraine and with sadness we mourn the bloodshed, the losses of lives, the suffering of the people, the humanitarian crises with hundreds of thousands of refugees caused by this war.

With fear we see the increasing risks for further and incalculable escalations of this conflict where nuclear threats are already put on the table.

We have received calls for prayers as well as messages of great concern from all three regions and we call upon all of you to pray in your churches and congregations for peace in Ukraine, in Europe and in this world and for all people who are suffering from this crisis, especially the Ukrainian people, civilians, elderly people, men, women and children who have become the victims of the aggression.

We condemn this blatant violation of the law of the nations that had been established after 2nd World War on 26 June 1945, which began after the assault of Germany on Poland on 1 September 1939.

At that time it has been declared in the Charter of the United Nations:

“WE THE PEOPLES OF THE UNITED NATIONS DETERMINED

to save succeeding generations from the scourge of war, which twice in our lifetime has brought untold sorrow to mankind, and

to reaffirm faith in fundamental human rights, in the dignity and worth of the human person, in the equal rights of men and women and of nations large and small, and

to establish conditions under which justice and respect for the obligations arising from treaties and other sources of international law can be maintained, and

to promote social progress and better standards of life in larger freedom,

AND FOR THESE ENDS

to practice tolerance and live together in peace with one another as good neighbors, and

to unite our strength to maintain international peace and security, and

to ensure, by the acceptance of principles and the institution of methods, that armed force shall not be used, save in the common interest, and

to employ international machinery for the promotion of the economic and social advancement of all peoples.”

In these alarming times, the UEM stands together as Communion of Churches in three Continents in our common mission striving for justice and peace.

With the entire ecumenical family as expressed in the statement of the World Council of Churches we appeal to President Putin to stop this war and to restore peace to the people and nation of the Ukraine. We support all efforts of our ecumenical partners and the World Council of Churches to assist and support the victims of this war and to work for peace by any diplomatic means and peace building action which might end immediately the deadly fighting and bloodshed and prevent any further extremely dangerous and deadly escalation of this conflict.

“BLESSED ARE THE PEACEMAKERS, FOR THEY WILL BE CALLED CHILDREN OF GOD.” Matthew 5: 9